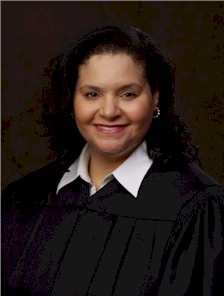 DALLAS, TX – On September 18, 2019, Ada Elene Brown was sworn in by District Judge Ed Kinkeade to serve as United States District Judge for the Northern District of Texas. A formal investiture ceremony for Judge Brown will be held at a later date.

Judge Brown brings a wide range of criminal and civil law experience from both sides of the bench. She has most recently served for six years as a Justice on the Court of Appeals for the Fifth District of Texas in Dallas, where she handled all manner of appeals from Texas trial courts. Her tenure as an appellate judge was informed by her previous work as a trial judge in Dallas County Criminal Court
Number 1, by her civil litigation experience at McKool Smith, P.C., and by her years as an Assistant District Attorney and as a Family Violence Advocate for the Dallas County District Attorney’s Office. Judge Brown also held a teaching post for three years at Southern Methodist University Dedman School of Law, where she was an adjunct professor of trial advocacy.