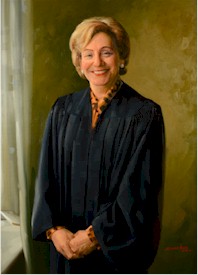 Judge Lynn attended UVA as one of the first women in the college. She then attended law school at SMU, where she graduated first in her class. Judge Lynn was a partner at Carrington, Coleman in Dallas until 1999. She was designated by the National Law Journal in 1998 as one of the 50 most influential women attorneys in the country. She served as 1998-99 chair of the American Bar Association’s Section of Litigation and as the chair of the Judicial Division in 2008-2009. She received SMU’s Distinguished Alumni Award for private practice in 1999. Judge Lynn was the first recipient of the Louise Raggio award for her contributions to the profession. In 2010, she received from the International Women’s Forum the Women Who Make A Difference Award. In 2011, an American Inn of Court chapter, dedicated to intellectual property, was chartered in her name. She is a Judicial Advisor for The Sedona Conference patent working groups, and is the Secretary of the national American Inns of Court Board. Judge Lynn is the Chief Judge of the Northern District of Texas, where she has been a judge since 2000. She is married to trial lawyer Mike Lynn and has two daughters and two granddaughters.

Judge Lynn will be publicly recognized at the Texas Bar Foundation Annual Dinner held on June 14, 2019 at the JW Marriott in Austin. SMU Dedman School of Law will receive a $1,000 scholarship donation in honor of Judge Lynn.

Election to the Fellows of the Texas Bar Foundation is one of the highest honors that can be bestowed upon a member of the State Bar of Texas, representing the top one-third of one percent of Texas attorneys. Selection is based on an outstanding record in the legal profession as well as proven commitment to support the community at large. For more information about the Texas Bar Foundation, please visit www.txbf.org.