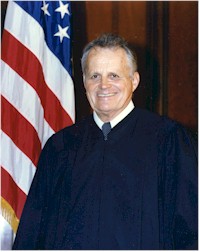 This week, we remember Judge David Owen Belew (1920-2001) of Fort Worth who served in the 90th Infantry Division of the United States Army from 1942 to 1946, rising to the rank of Captain. He was one of the first soldiers to land on Utah Beach during the Normandy invasion on June 6, 1944. Judge Belew was wounded at least three times during World War II, returning to combat after recovering each time. For his heroism, he received the Silver Star, three Purple Hearts, and five Battle Stars.

Judge Belew was appointed United States District Judge for the Northern District of Texas on April 26, 1979, by President Jimmy Carter and entered duty May 4, 1979. He presided over cases in Fort Worth. He assumed senior status on May 7, 1990.

We also remember the service of our other former judges. They are: